Karma, Is It All Doom and Gloom? 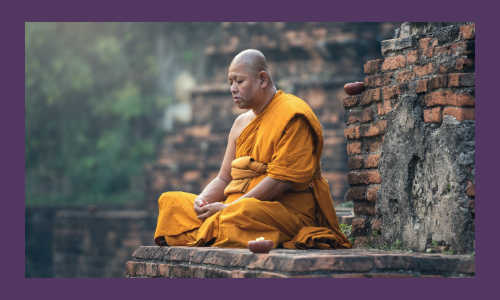 Karma literally means action, and the law of karma is the law of cause and effect of your actions. How exactly does that law work? Everything you say and do gives off an energetic vibration. Sooner or later there will be an energetic response to restore balance.

Who determines the karmic response?

Nothing or no one is monitoring what happens and how balance needs to be restored. Souls voluntarily agree on this with each other. Karma is often explained in terms of guilt and penance. Spiritual teacher Michael sees this in a different light because according to him it’s not about judgment or punishment. It is about sharing experiences and restoring balance if necessary. This means that karma is not necessarily negative: very good deeds will also be balanced.

The 7 levels of karma

According to Michael, there are 7 levels of karma, with level 1 being simple and not personal. For example, you cut someone off in traffic and later someone else cuts you off. The exchange is not personal, meaning someone else can restore the balance. It doesn’t have to be the person you cut off earlier.

An example of personal karma is murder. If person A kills person B then this must be settled between these 2 souls in a next life. Incidentally, this does not automatically mean that A will then be killed by B. It may also be that B’s life is saved by A, physically or psychologically. That also restores the balance.

Now you might expect that murder is the worst thing you can do to another. However, murder is level 5 karma, so there are 2 levels of crimes that are considered even worse.

Karma levels 6 and 7 are called great karma and are about seriously violating someone’s fundamental right and availability of freedom of choice (creating negative karma) or, conversely, greatly increasing that (creating positive karma).

When someone is murdered, this person no longer has freedom of choice because his life has ended. He does not suffer from this as a human being, but his soul will have to plan a new life again. There is a lot involved in organizing a new lifetime, including creating soul agreements and a life plan.

What’s worse than having your life prematurely ended, is continuing to live in a way that has unfairly stripped you of your agency, like imprisoning an innocent person for the rest of their life, or forcing people into slavery that they must endure for decades.

The worst thing you can do to another human being is to take away their health and freedom of choice mentally and spiritually. This has to do with brainwashing as it happens within cults, voodoo and placing curses. People then become a kind of zombie who can no longer think and decide independently. They are out of touch with their inner wisdom and feel spiritually lost. Although the connection with your Divine origin can never be lost, it is possible that you can no longer connect with it due to a curse.

Can you imagine how horrible it is to have to live like this: cut off from an inner anchor, groping around in the dark of madness without a compass and still desperately trying to find your way? An inhuman agony.

Is there good news as well?

Yes, there is such a thing as philanthropic karma. This arises when you selflessly help others to survive or to lead a better life with more choices available to them.

Good examples are Bob Geldof who organized the Live Aid benefit concert with millions in proceeds for the starving people in Ethiopia, and Oskar Schindler who managed to save the lives of more than 1000 Polish Jews during World War II.

Nothing is what it seems

But … watch out! You can’t tell what’s going on karmically from someone’s life and experiences, because you only see the tip of the iceberg. You don’t know the soul’s history and mutual soul agreements.

If someone is a victim of a crime, you cannot say that he was a perpetrator in a previous lifetime. Unfortunately, this short-sighted reasoning is common, even in spiritual counselling. Such judgment is in itself damaging, for regardless of one’s soul-level history, every human being deserves help and compassion.

Indeed, if someone does good deeds, he can create new philanthropic karma, but he can also balance old negative karma with this. It is also possible that he does it purely out of calculation so that no philanthropic karma arises because the good deeds have not been done selflessly. This is something you often cannot see from the outside. Only the soul knows the true motives.

Other forms of karma

What you also don’t know is whether any of the following factors play a role:

Self-karma: This means that a person unconsciously creates events in their life that reflect deep-seated beliefs that they have already acquired in previous lifetimes. The experiences in the current lifetime can then serve as a mirror to heal their unconscious beliefs.

A soul can voluntarily take on world karma (often together with a group of souls scattered all over the world) to raise awareness about a certain theme, for example regarding sexual abuse.

Last but not least: bad luck. Not everything that happens is predetermined or intended. This might be a bit of a shock if you’re an ardent believer in everything-has-a-reason thinking. Yet it is purely logical that in a world where every human being has freedom of choice, unexpected things can happen that the soul has not chosen beforehand.

The bottom line is: you never know exactly what is going on. Don’t judge other people or yourself, instead try to look at and respond compassionately to everyone’s learning experiences and life path, including your own.

Our lives are not so much determined by what happens to us, but by how we deal with it. Therein lies our greatest freedom of choice and our greatest strength.

Use your right and ability to choose wisely.

Want to clear blockages and karma?

A Soul Realignment Akashic Reading is a great way to clear

your soul’s past and liberate you in the present